What’s Best for the Child

Lloyd Platt & Co recently had an article published in The Guardian on the misconceptions involved in private law children cases. You can read the article below. 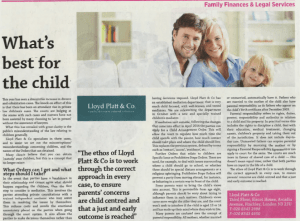 What’s Best For The Child

This year has seen a discernible increase in divorce and cohabitation cases. The knock-on effect of this is that there has been an attendant rise in private law children’s cases. The courts are bulging at the seams with such cases and matters have not been assisted by many choosing to ‘act in person’ without the assistance of lawyers.

What this has revealed with great clarity is the public’s misunderstanding of the law relating to children generally.

Lloyd Platt & Co specialises in these cases, and to assist we set out the misconceptions/misunderstandings concerning children, and the names of the Orders that can be obtained.

Many clients believe that you can obtain custody over children, but this is a concept that no longer exists.

What Orders can I get and what steps should I take?

In the event that parties have a breakdown in their relationship and cannot agree what should happen regarding the children, then the first step to consider is mediation. This involves the parties attending private consultations with a trained independent mediation who may assist them in resolving the issues by themselves.

This reduces costs and avoids the emotional uncertainty placed on the parties when going through the court system. It also allows the parties to make decisions themselves rather than having decisions imposed. Lloyd Platt & Co has as established mediation department that is very much child focused, with well-known and tested mediators. We are relaunching the department in October with a new and specially trained children’s mediator.

If mediation isn’t suitable, following the changes that came into effect in April 2014 the parties can apply for a Child Agreement Order. This will allow the court to regulate how much time the child spends with the parent, how much contact should take place and where the child should live. This replaces the previous system, defined by terms such as ‘contact’, ‘access’, ‘residence’, etc.

Further Orders that relate to children are Specific Issue or Prohibitive Steps Orders. These are used, for example, to deal with issues surrounding where a child should go to school, or whether there should be special dietary arrangements or a religious upbringing. Prohibitive Steps Orders will prevent a party from moving abroad, for instance, or behaving in a certain way in front of the child/

Some parents want to bring the child’s views into account. This is permissible from age eight, although parents should by wary about trying to influence them in such matters. Children’s views carry more weight the older they are, and the court won’t seek to interfere if the child is aged 13 to 14 and has made up their mind where they wish to live.

Parental responsibility refers to rights, duties, powers, responsibility and authority in relation to a child and his property. In practical terms this includes the right to discipline a child, deal with their education, medical treatment, changing names, children’s property and taking them out of the jurisdiction. It does not include day-to-day care. Unmarried fathers can acquire parental responsibility by marrying the mother or signing a Parental Responsibility Agreement or can apply to court of the same. The courts are much more in favour of shared care of a child – this doesn’t mean equal time; rather that both parties have an input in the life of a child.

The ethos of Lloyd Platt & Co is to work through the correct approach in every case, to ensure parents’ concerns are child centred and that a just and early outcome is reached. 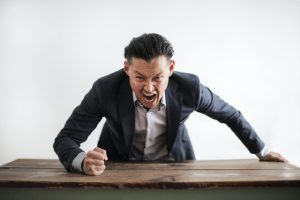